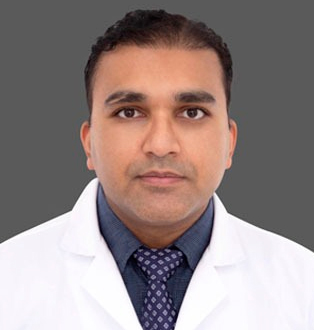 Dr. Piyush Somani is an experienced gastroenterologist/advanced endoscopist with over 12 years of experience and performs interventional/diagnostic endoscopy. He has performed more than 10,000 endoscopic procedures. He completed MBBS and Internal Medicine (M.D) training from Gujarat University, Ahmedabad, India. He completed his Gastroenterology (D.M) training from Nair Hospital, Mumbai (India). He passed D.N.B (Gastroenterology) in 2012. Dr. Piyush worked as an Assistant Professor (lecturer) in Nair Hospital, Mumbai from 2012 to 2014.

He underwent clinical training in advanced interventional endoscopy/Endoscopic Ultrasound (EUS) at Shengjing Hospital, China Medical University, China under mentorship of Professor Sun Siyu in 2015. This hospital performs more than 75000 endoscopic procedures per year with around 5000 EUS procedures per year.

He also underwent clinical training in advanced ERCP/EUS in Jaswant Rai Speciality Hospital, Meerut, India under mentorship of Dr. Malay Sharma. Dr Malay centre performs more than 2500 ERCP per year with around 2000 EUS procedures per year. Dr. Piyush has successfully performed more than 650 Endoscopic Ultrasound (EUS) procedures including complex procedures like pseudocyst drainage, walled off necrosis drainage with bile duct drainage and around 250 FNAC/Biopsy. He also performed around 500 ERCP procedures during the period from 2015 to 2016.

He was working in a Private hospital in Dubai for 4 years before joining Al Zahra Hospital, Sharjah in May 2020. He has performed multiple complex endoscopy procedures in Dubai.

He is one of the few gastroenterologists in UAE who performs cholangioscopy (endoscopy inside the common bile duct).

He has expertise in performing following procedures:

I have done the Endoscopic ultrasound with Dr Piyush Somani. He is a very professional and talented doctor. After the endoscopy I was referred to...